Learn The Secrets Wall Street Doesn’t Want You To Know

I got an email the other day from an investor - let’s call him John. John told me he’s looking to generate financial freedom, passive income and general wealth.

But John’s problem was that he kept on following his friends/guru/media and kept on losing money investing. His latest investment was already down 30% in a short amount of time

I sympathised with him as when I was a bright eyed and naive investor at 18 I worked very hard and saved $10,000. Knowing investing was the right thing to do, I headed down to my bank spoke to the financial advisor who gave me some pamphlets I didn’t understand. At the time the FOMO stocks were biotech funds .

Unfortunately, Things Did Not Go To Plan

It even hurts recalling the story.

But my picks lost a whopping 45% of my money and it gets worse.

Whilst soaking in all the money I lost. I also realised after looking at the pamphlets that I had to pay a 5% upfront fee and the 3.4% annual fee that I had also been paying. Ever since then, I wish that building wealth and investment was taught at school. Had I understood my current investment strategy then, I would have turned those $10,000 into $292,576.69 by now. Instead I lost $4000 picking random funds based on what I had been reading about in the financial press. To make matters worse - I was put off investing for years.

That’s why I sympathise with John so much.

Whilst I’ve been fortunate enough to recover from that ordeal and do really well. I wouldn’t wish that pain on anyone.

One reason I was able to recover is that I worked as an investment banker and lawyer and got to meet many successful investors who taught me so much.

Without them I might not be where I am today.

So when he reached out and said.

Please help me, Felix, he pleaded. Your free tips on Youtube and Twitter have helped tremendously already.

I too want to know how to set myself up for life. But not have it take my whole life.

Being the nice guy that I am. I couldn’t help but say yes.

And this lead me to creating.

Now I know this sounds too good to be true but hear me out.

If you’re reading this, I’m sure you’re aware of what’s happening in the financial world.

And what you may have noticed is that people are creating more cash than they know what to do with overnight.

Whether through investing or trading.

What’s their secret, you may be thinking?

Are they geniuses and a lot smarter than me?

Do they know something I don’t, then?

Whilst information is key. One thing you need to have that I see all successful people who have managed to get wealthy in a short amount of time have is that they think a certain way about investing.

As I explained this to John, he replied back sounding dejected and said “well I guess some people are just born with it”.

I know I certainly wasn’t. I stumbled and bumbled for years trying to make life changing money.

As I explained these things to him, he said. “Where can I learn? Please put something together”.

And this is what lead me to my new guide.

Now, if you’re asking, what is it?

I called it that because that’s exactly what it does. I’ve included tactics that I’ve learned over 20 years as an investor.

And now I’m ready to teach you.

The only thing is it won’t take you 20 years like me.

Learn The Secrets Wall Street Doesn’t Want You To Know

What to Expect from this Course

You will learn the secrets of beating the market.
Learn what the Whales and Big Banks forecast.
The secret methods used by legendary investors to 10x to 100x your portfolio in the shortest amount of time.

Never Buy a Falling Knife again.
How to Benefit from High Inflation.
How to Protect Your Portfolio against Interest Rate Rises
How to stop getting taken advantage of by my money managers (Aren’t you tired of paying for their kid’s college funds and their 5th holiday home?)
How to go from no knowledge to a Wolf of Wall Street
Check with your CPA, as this course may be tax deductible.

Is this Course Right for You?

If you have no interest in generating wealth in the shortest amount of time possible. Then this isn’t for you.

But if you are, then I give you all the above and much more. I fully expect you to 10x to 100x your portfolio with my secret tactics and the mental models on applying them. Felix gives you all the tools, benchmarks and analysis to make your 2022 a successful one.

Lifetime Access to Lectures and Course Materials Will Benefit You if:

Over step-by-step in depth lectures that walk you through

Enroll Now
and Make 2022 Your Best Year Yet!

Look at what current students have to say about the course: 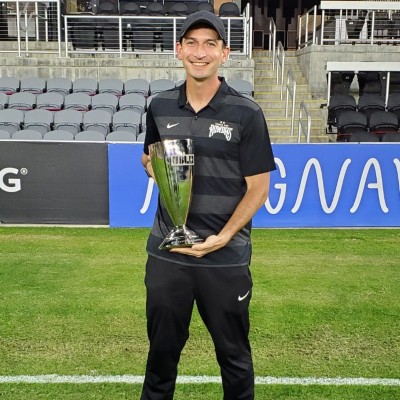 Watched your YouTube videos and became my go to channel. What is most valuable to me is that Felix has a very good teaching method, with an easy to learn approach which more importantly allows the student the ability to retain the information. YouTube videos are excellent and very informative, however if you want a edge to make money then you will not be disappointed with the course. 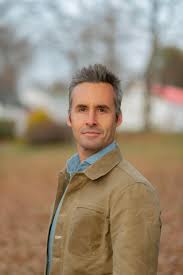 I needed to have a clear understanding of how to look at and evaluate my investments I had started to follow him on the internet. He was the first one who spoke to a level that was clear and had depth. He not your typical youtube expert. I decide to sign up for the courses created by Felix because I could see the depth of his perspectives in investments. He truely aligns with my trajectory and I felt that he would be my benchmark. The course clearly ties all the various pieces of information together in a very cohesive manner I finally feel secure about what I am trying to do that I otherwise would not be able to do by myself....he is a gem..... 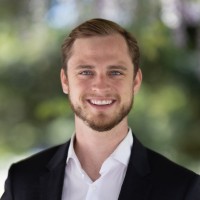 I joined the course to gain a broader understanding of the market and trading. Because Felix actually seems to be interested in his members success. The info and detail you provide in your videos combined with positive encouragement. The course is fantastic and Felix inspires me to keep learning.

Have been watching & enjoying Felix’s content on YouTube for a while. So when he introduced his courses, I jumped at the chance to learn more from him. There is so much value in the depth of the course. Feels like he wants you to learn everything he is trying to teach, as opposed to other people’s content that feels incomplete or that they’re only giving you bits & pieces. Enjoying the course a lot, looking forward to other courses in the future. Thanks Felix

I like that the segments are "bite sized" meaning not too long, and can be reviewed throughout the series. Felix doesn't assume that students have an expertise which makes it easier to progress in options knowledge.

Inside the Beat The Market in 2022 curriculum, you'll find step-by-step training for:

What the Big Banks Forecast for 2022:

What Lessons Will You Learn from 2021?

How to Benefit from High Inflation

Should You Hold Cash and How Much Cash?

Picking Winners: Benchmarks of Key Stocks for all Major Sectors 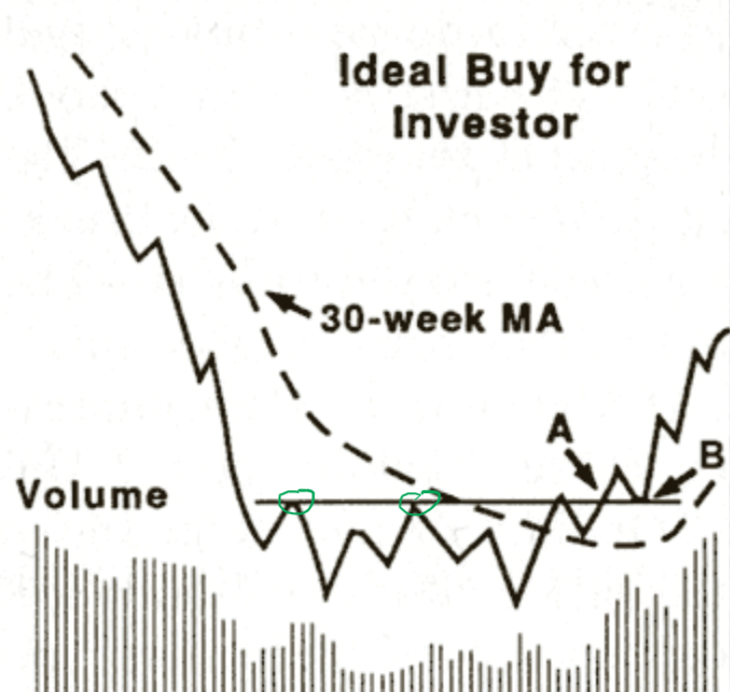 How to Master Buying the Dip 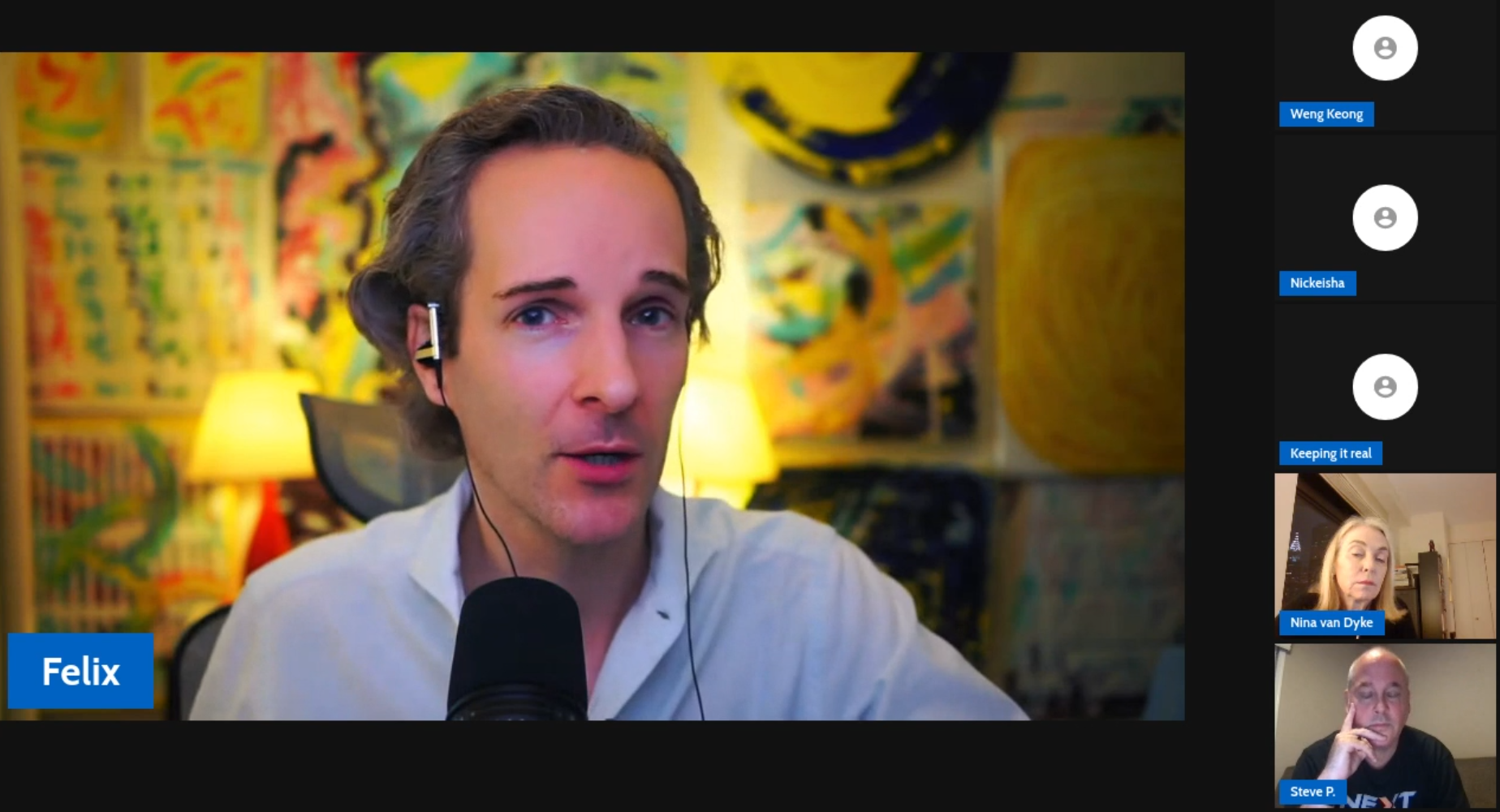 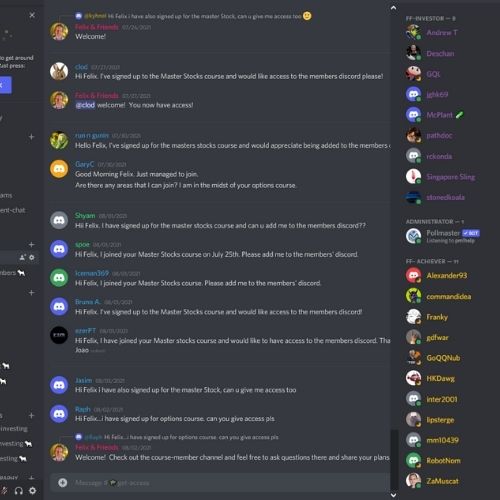 About The Course Teacher,
Felix

I am excited to share with you my knowledge built up through an economics degree, a stint at an investment bank, time served as a corporate lawyer and years of investing in stocks, bonds, real estate and private equity.

These experiences will help you become a smarter investor, and put you on track to financial independence. Let us build lasting wealth together.

"I want you to become financially independent through stock investing. 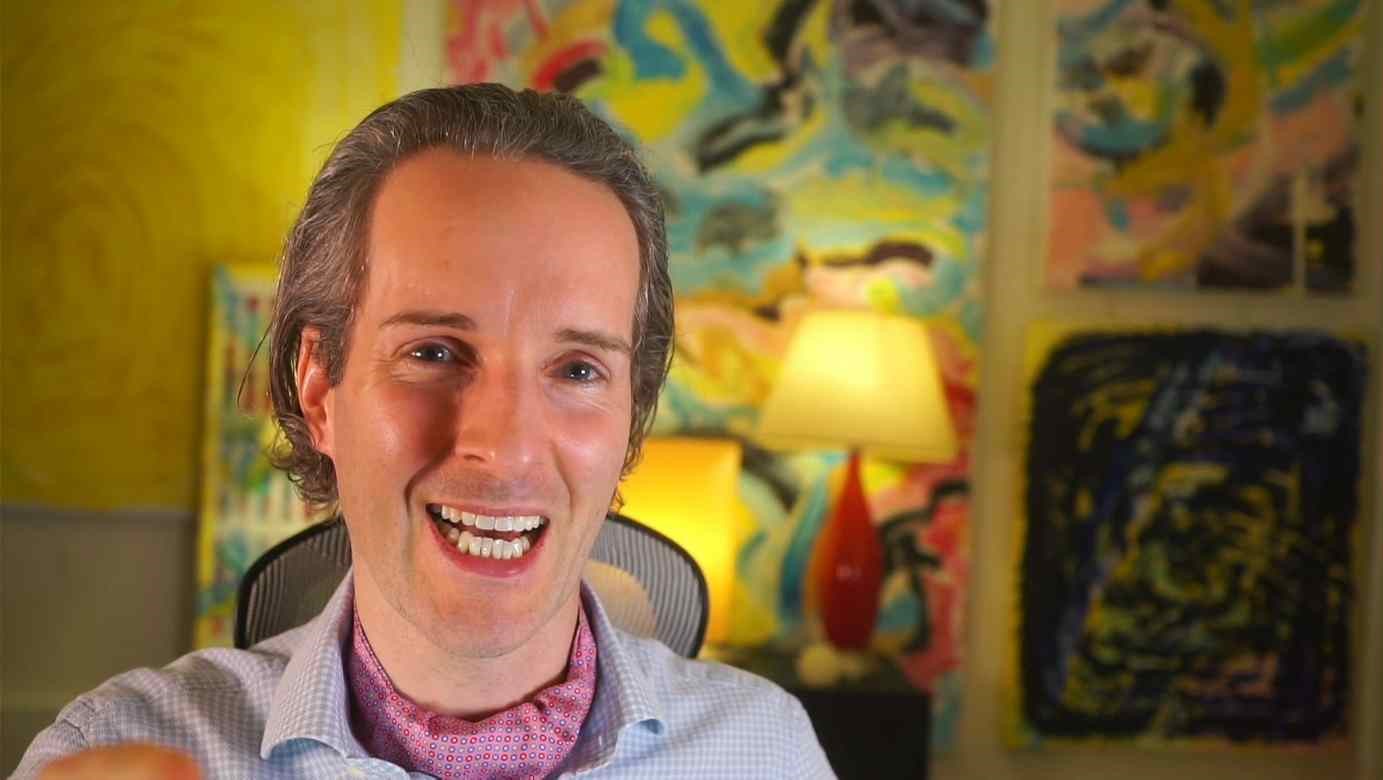 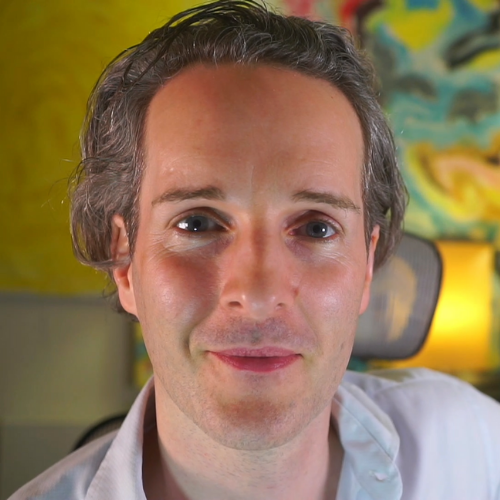 During this special offer period, the pricing is much lower for this already fully comprehensive course. As the curriculum grows the course price will increase.

Enroll now and secure lifetime access to all current and all future course materials at the current low price!

[See above and EXPAND to see all lectures and course materials already LIVE.] Our refund policy is an UNBEATABLE 90-Day, 100% Money-Back Guarantee.

If you don’t love one of our programs, just email felix@goatacademy.org at ANY TIME during the first 90 days and show us you’re doing the exercises, have completed the course and not getting results. We’ll refund 100% of the purchase price.

Don’t wait! Look at what past students have to say about this course 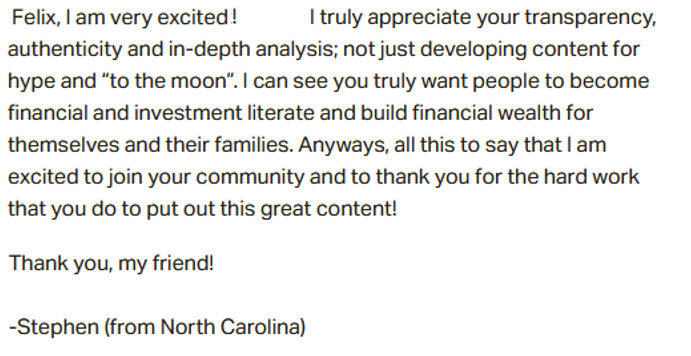 How long do I have access to the course?

Is forever long enough? You have unlimited access to this course on all your devices.

When does the course start and finish?

The course starts on December 27 and continues for the full 2022 calendar year. Always check back for more lectures and updates, which are included for free.

I really enjoy sharing the knowledge I have acquired over the past 20 years as an economist, investment banker, corporate lawyer and investor.

I get so much satisfaction from seeing students enroll and become smarter investors, every day.

Join the tribe and you too will wake up every morning excited about your prosperous future! 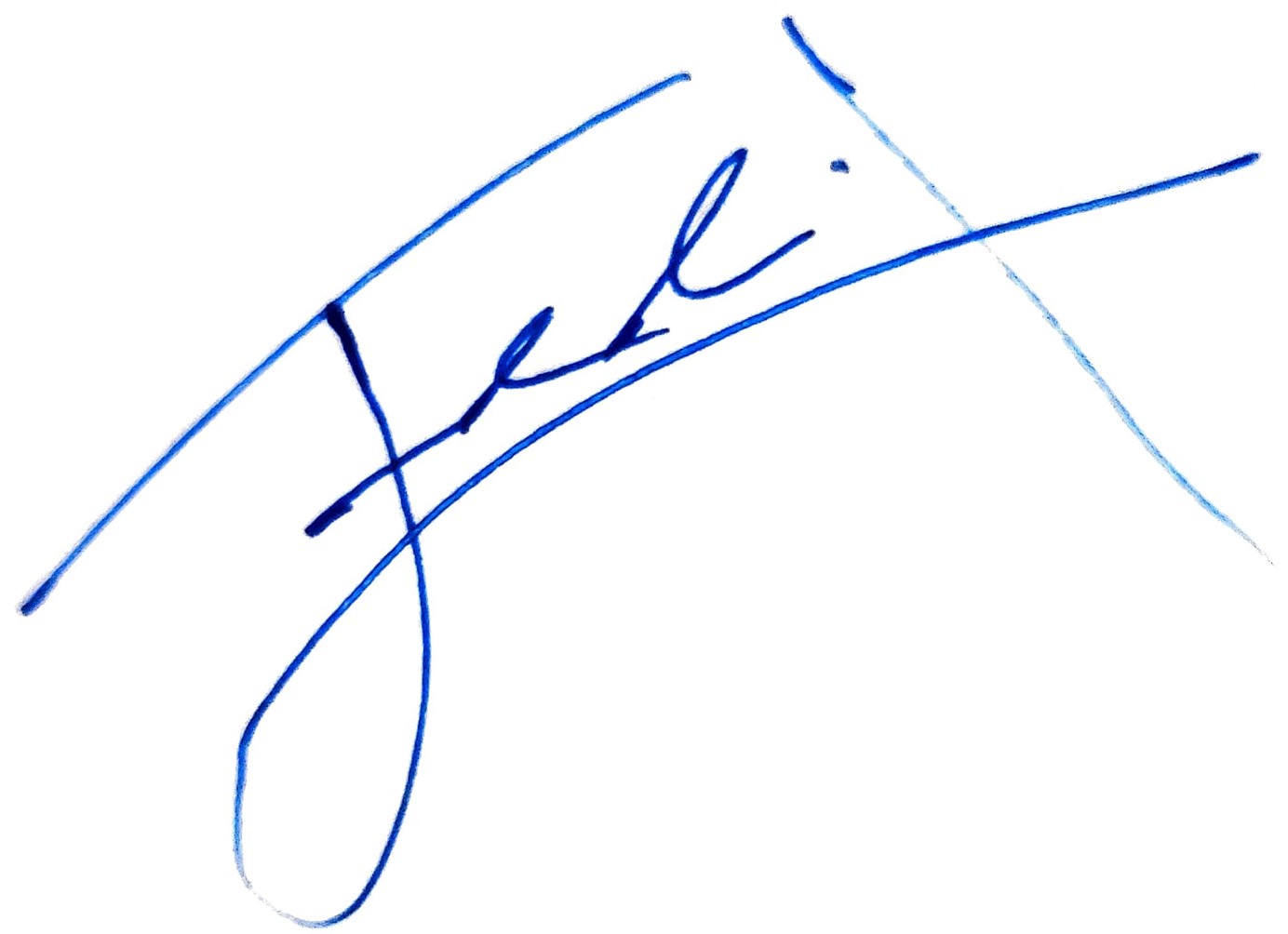 ﻿This is provided from my lovely lawyers:

I am not an investment advisor. All opinions are mine alone. There are risks involved in placing any investment in securities or cryptocurrencies or in anything.

None of the information presented is intended to form the basis for any offer or recommendation or have any regard to the investment objectives, financial situation or needs of any specific person.

So everything you're going to see and/or hear shall not be construed as tax, legal, insurance, or financial advice.